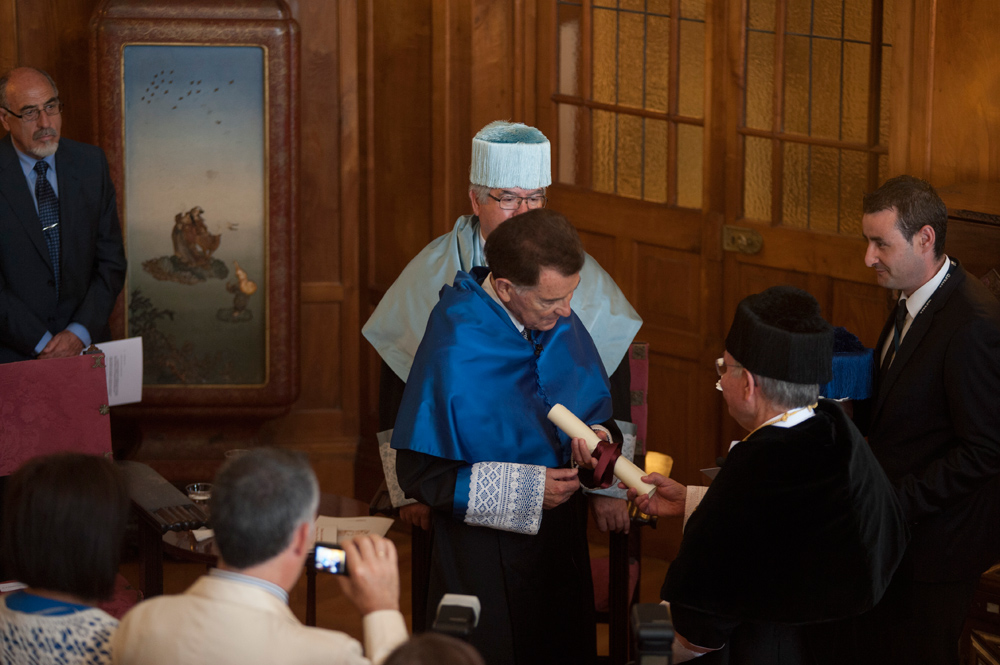 Chilean politician and medical doctor. After graduating in Medicine from the University of Chile, Ms Bachelet developed an intense political career and occupied the highest government positions in her native country. In 2000 she became Minister for Health and later Defence Minister. She was the first woman in the country and in Iberoamerica to hold this post and she gained great popularity during her office. When she was proclaimed President of the Republic of Chile in 2006, she initiated social measures such as a free health system for the over-60s and the creation of a special inter-party commission to work on reforms for the country’s pension system. She is currently Executive Director of UN Women, the UN agency for gender equality.

Admired internationally for her technique, musicality and stage presence, the Spanish mezzosoprano is considered one of the best voices in the second half of the 20th century. Ms Berganza is frequently associated with characters from operas by Rossini, Mozart and Bizet and has performed in the most famous theatres around the world, including La Scala in Milan, the Royal Opera House in London and the Metropolitan Opera House in New York. The mezzo from Madrid has received various awards, such as the Prince of Asturias Award for the Arts (1991) and the Spanish National Music Award (1996).

A prestigious Spanish cardiologist who presently combines his post as director general of the CNIC (the Spanish National Centre for Cardiovascular Research) with his role as director of the Cardiovascular Institute at Mount Sinai Hospital in New York. Dr Fuster has received the highest awards for research from the four principal international cardiology organisations. His contribution to cardiovascular medicine has had a significant impact on improving treatments for cardiac patients and his research on the origins of cardiovascular accidents has contributed to improving the prevention and treatment of heart attacks. He is also the author of more than 500 scientific articles, published in medical journals around the world, and two of the most widely recognised books on clinical cardiology and cardiological research.

Vice-president of the Santillana Foundation, honorary board member for Grupo Prisa and president of the SIALE (Iberoamerican Society for Friends of Books and Publishing), Mr Perez was for many years one of the most important figures in the publishing field in Spain, Portugal and Latin America.

His relationship with the publishing sector began in the 1950s, when he set up a bookstall each morning at La Magdalena Palace.

With this distinction, the Menendez Pelayo International University wanted to recognise his expansive professional career as an editor in the Spanish language field and his contribution to strengthening the bond which exists between Spain and Latin America.

In recognition of his merits as a poet and writer, the unique voice of Mr Hierro stands out in the panorama of Spanish literature, having national and international prestige. An essayist and literary critic, his works of creation and interpretation in the field of art likewise attest to the richness and variety of his research and his university spirit.

Mr Guedes has tirelessly dedicated himself to literature, to erudite research on the Portuguese language, and to publishing. His work has earned the respect of all his colleagues as well as international recognition, which led to his election as President of the International Publishers Association.

Dr Massague i Sole’s contributions to the study of cellular differentiation are based on the use of molecular biology and genetic engineering. He has also produced in-depth studies on the role of certain glycoproteins in cellular transformation, highlighting the existence of complex intracellular networks.

He also undertakes his research work as head of a large group of Spanish scientists working in the United States, who maintain strong ties with Spain.

Dr Chevalier developed an impressive record as a teacher and a researcher on traditional and folkloric literature, on the Ariostesque epic and ballads, on literary reception and the history of Hispanic conceptism. His work and publications in the field of paremiology confirmed his international status as a renowned Hispanist who also contributed to enriching the cultural relationship between Spain and France.

A unique and inimitable Spanish actress with an extensive career in film, theatre and television. Ms Espert has acted in numerous films, including La tirana (1958), Maria Rosa (1966) and La ciutat cremada (1976), and has had great success in the theatre, starring in Doña Rosita la soltera (1981), Salome (1985), Who’s Afraid of Virginia Woolf? (1999), and La Casa de Bernarda Alba (2009). She has received the Ondas Award (1959), the National Theatre Award (1984) and the Gold Medal for Merit in the Fine Arts (1983), among other recognitions. She has been included in UIMP’s Cloister for her decisive contribution to acts of solidarity and a free world.

A ubiquitous reference in Spanish economic thinking, Dr Segura has played a fundamental role in the modernisation of the study of microeconomics in Spanish universities by combining expository clarity with analytical rigour. These qualities are reflected in his textbooks. Together with his advisory work on public politics related to the labour market, social protection programmes and competition defence policy, he has made a decisive contribution to the smooth operation of important institutions such as the Bank of Spain or the CNMV (the Spanish National Securities Market Commission), over which he currently presides.

A Colombian politician and mathematician, Dr Fajardo has a degree in Maths from the University of the Andes and a PhD from the University of Wisconsin-Madison. He formed an independent civic movement through which he became mayor of Medellin (Colombia) in 2003. During his term in office, he transformed the city by making education an engine for social change and a base to subvert the violence and exclusion of the disadvantaged. It is precisely for his contribution to education in his country that the Menendez Pelayo International University wanted to honour him with this title.

An internationally renowned lyric soprano, Ms Caballe is recognised for her excellent technique, vocal nuance and exquisite pianissimos. She has interpreted more than eighty characters in operas ranging from the Baroque to Verdi, Wagner, Puccini and Richard Strauss. Her roles have included Norma, Salome, Violetta, Marschallin, Semiramide and Isolde in the world’s grandest opera theatres, such as La Scala in Milan, the Opera in Paris or the Metropolitan in New York. In the past few years, she has done extensive charitable work.

With their works and their careers deeply rooted in the Iberian Peninsula and their search for an architecture committed to meeting society’s needs, Dr Bohigas and Dr Siza coincide with UIMP’s values and social mission. Their signature modern architectural work is widely recognised internationally.

Dr Barbacid’s contributions to the study of cellular differentiation, based on the use of molecular biology and genetic engineering, have delivered widely influential results, as has his research on the excessive cellular proliferation which causes tumours.

The University also honoured the research work he does with a large group of Spanish scientists working in the United States,who maintain strong ties with Spain.

(Ex-chancellor of the Federal Republic of Germany.) UIMP wanted to acknowledge Mr Schmidt’s humanitarian ethics in defence of fundamental liberties, his commitment to peace which has marked his political career, and his personal and intellectual behaviour, dominated by the unified principles of moral duty and critical reasoning.

His life has been a passionate illustration of the exemplary line of Germanic thinking following the statements in Kantian philosophy.

A significant intellectual, Dr Hirschman’s research gave rise to a better understanding of international trade, to the development of codes of conduct for companies, organisations and states, as well as to a renewed and productive dialogue on reform.