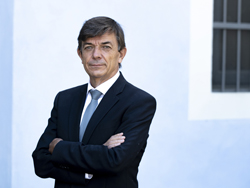 Born in Reus in 1956, Carlos Andradas has resided in Madrid since 1961. A graduate in mathematics from the Complutense University of Madrid (UCM), he also holds a PhD in mathematics from the UCM and the University of New Mexico (Albuquerque, USA). A full tenured professor in Algebra at the UCM since 1997, he has conducted research into the field of real algebraic geometry, and was a postdoctoral fellow in Dortmund (Germany) and a guest lecturer at the universities of Berkeley, Stanford and Harvard.

Moreover, he has undertaken research stays at international institutions such as the universities of Rennes, Pisa, Dortmund and Münster, as well as at the Mathematical Science Research Institute (MSRI) at Berkeley.

Since 1993, he has been involved in research projects funded by National Research Plans and been national coordinator for European projects. He has published dozens of articles in high-impact journals and books for renowned international publishers.

A huge supporter of scientific outreach, he has written books for children as well as several articles for the general media. He has also collaborated with national media outlets.

He was Chair of the Royal Spanish Mathematical Society (2000-2006) and Chair of the Confederation of Spanish Scientific Societies (COSCE) from 2011 to 2015.

He is presently the Honorary Chancellor of the UCM.

He has been appointed as a member of the Science, Technology and Innovation Advisory Council at the Ministry of Economic Affairs and Competitiveness. Before joining the UIMP, he was the scientific advisor to the Office of the Third Deputy Prime Minister and Minister for Ecological Transition and Demographic Challenge, Ms Teresa Ribera.